This post discusses Josef Albers’ classic book ‘Interaction of Color,’ one of the most influential art and design texts of the 20thcentury.  Albers was a painter, designer and educator who is regarded as a pioneer of Modernism.

“In visual perception, a thing is never seen as it really is” Josef Albers 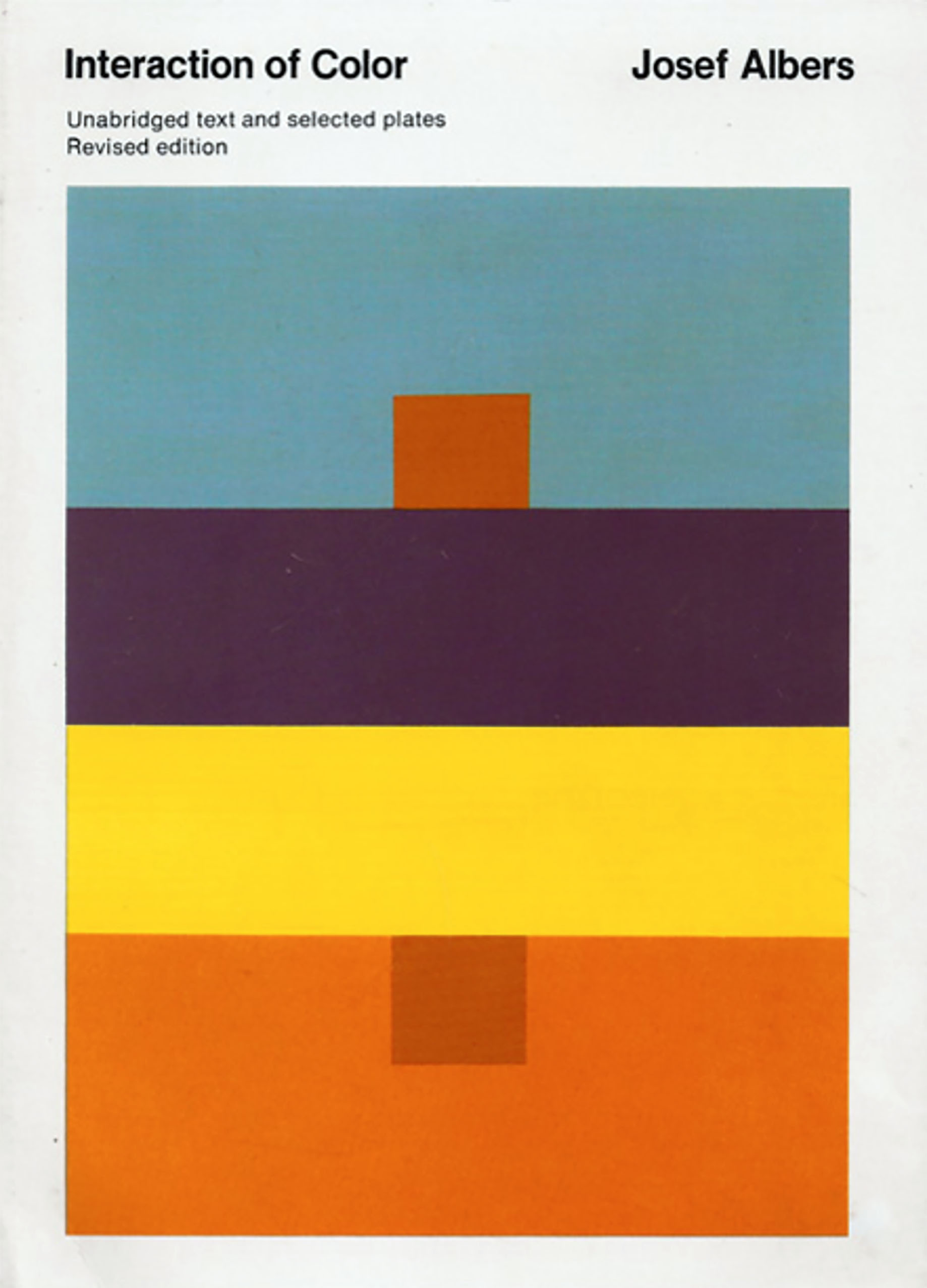 The cover of Interaction of Color. Published by Yale University Press in 1963.

Who was Josef Albers?

Josef Albers (1888-1976) was a German-born artist, designer and educator. He firstly trained and worked as a primary school teacher before formally studying painting at the Royal Academy of Arts in Germany. He then taught at the revolutionary art school, the Bauhaus alongside renowned artists such as Paul Klee, Kadinsky and László Moholy-Nagy. Albers’ built his reputation as a both a renowned painter and object designer.

When the Nazi’s forced the closure of the Bauhaus in 1933, Albers then migrated to America where he taught at the Black Mountain College, another experimental art school based in North Carolina. During his time at BMC he taught and inspired a new generation of artists such as Robert Rauschenberg and Willem de Kooning. He then moved on to take up the esteemed position of Head of Design at Yale. It was during this time that he wrote one of his most famous books, titled The Interaction of Color (1963).

In 1971, Albers was the first living artist to have a solo exhibition at the Metropolitan Museum of Art in New York, passing away shortly after in 1976. At this time, he had been awarded 14 honorary doctorates from universities across Europe, Canada, and the United States. His influence on design education, continues to inspire young artists and designers today.

What is Interaction of Color?

Interaction of Color is a handbook and teaching resource for artists and designers that shares Albers’ theory of color. Originally printed in 1963, the text outlines a set of principles and teaching methods for understanding and perceiving color in different ways. At its time of publication, the text created much controversy around its proposition of how people understand and interact with color. The book is not so much a theoretical framework but an experimental approach that looks at how color can be studied in art and design.

Some of the key principles that Albers presents in Interaction of Color include:

“Naturally, practice is not preceded but followed by theory. Such study promotes a more lasting teaching and learning through experience. Its aim is development of creativeness realized in discovery and invention – the criteria of creativity, or flexibility, being imagination and fantasy. Altogether it promotes “thinking in situations,” a new educational concept unfortunately little known and less cultivated, so far” (p.68).

Albers’ pedagogical approach of allowing students to ‘think in situations’ can be understood as a form of experiential learning. The roots of this educational approach can be found in the work of  John Dewey (1938).

In all, Albers constructs a pioneering way of seeing, learning, teaching and studying color by drawing new attention to how it is perceived and understood in people’s lives.

What I find most intriguing about Interaction of Color is Albers’ discussion of the practice of teaching art and design.

I really connect with Albers’ discussion of progressive education teaching methods and how these can be intertwined with technical and theoretical knowledge that is specific to design. His ability to acknowledge the significance of combining technical skill with creative exploration underscores his pioneering vision for 20th-century design education. It is worthy to reiterate that Albers was a fully trained primary school teacher before entering the art world and his expertise as an educator becomes clear in his ability to bring together experiential learning teaching methods with his technical knowledge of art and design. Albers advocates for educators to construct the pedagogical conditions for students to question themselves and their learning processes. Again, this teaching method is grounded in practice and the student’s applied processes of experiencing color through making. Finally, the point he makes around the necessity to approach theory as something that emerges from practice is revolutionary in stepping away from a dogmatic approach to the theorization of art, design, and education.

An informative video looking at the influence of Albers and fellow Bauhaus instructor, László Moholy-Nagy on 20th-century art and design.

Palle Nielsen, The Model, and Play as Social Activism

Children’s creative learning through the art of Daiga Grantina

A gap between new materialist theory and practice in art education

What are the possibilities of artworks in creative learning?